The first May Bank Holiday weekend saw our first Scout camp of 2017 with the troop heading to Aldwark Activity centre for a water activities weekend. The weather was dry, breezy and sunny and as a result we had a fantastic day out on the water on Saturday with all those attending having the chance to try kayaks and open canoes in the morning.

The crew from Aldwark ran a fun session and before long (after some of the leaders had taken an impromtu swim) we were working on our paddling skills by playing a host of games including scarecrow tig and bulldog! After a lunch time break to recharge on energy the afternoon was spent on a short tour, paddling upstream to near Aldwark village where we were treated to drinks and biscuits before heading for home.

Of course no day on the water would be finished without a few members having a swim. First it was the turn of the scouts to see how many of them would fit in an open canoe, clearly that was only going to end one way – damply! Next on arrival back at the site those who wished had the opportunity to practice their acrobatic skills jumping into the river.

The river wasn’t quite as warm as we hoped so it was nice to gather around the campfire in the evening for drinks and toasted marshmallows and a few campfire songs to finish off the day. 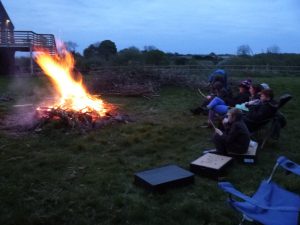 Sunday dawned dry and sunny again, if a little more windy but at least that meant we could pack the tents away nice and dry. Then it was time for a bit of firelighting with flints and looking at different ways of using open fire, from boiling water in Ghilie Kettle to mixing old and new technology and using small sticks to charge a mobile phone.

A great weekend, and we’re looking forward to the next camp already!

More in this section...